White woman masquerading as black resigned from NAACP chapter presidencyRachel Dolezal resigned as president of the Spokane, WA NAACP when it became clear that she was a white woman portraying herself as black. As a Howard University student in 2002, Dolezal sued the school for discriminating against her – for being white.’

Criminal Justice
About 1% of the American population (or 10% of adults) is in jail – much higher numbers than any other country in the world. Most of the imprisoned are black and brown people.
NAACP Criminal Justice Factsheet
Attorney Michelle Alexander-West’s book The New Jim Crow unveils the processes which have driven this explosion in the prison population.
Prison-based gerrymandering means that towns housing prisons get to declare inmates as belonging to their town, which drives down median income figures and qualifies towns and counties for government grants they wouldn’t qualify for otherwise.
Inmates making phone calls may be charged up to $10 just to be connected speak to their families.

Howard Witt (of the Chicago Tribune) reported that the six students faced prosecution for charges including second degree attempted murder – and possible prison sentences of up to 100 years – for allegedly participating in an unarmed school brawl that resulted in no serious injuries. The alleged brawl followed months of racial tension after hangman’s nooses were hung from a tree at the students’ school.

Education Justice – the Attacks on Public Education
Attacks on Public Education are destroying communities and school systems around the country. Chicago’s Democratic mayor Rahm Emanuel closed 49 schools in 1 day. Recently, the last public school closed in New Orleans, LA. At least 10 public schools were closed in Newark and the community fights to keep over than 12 more schools from being closed. 23 schools were closed in Philadelphia in order to fund a new $400 million prison Death by 1000 Cuts is a well-documented white paper that shows how it’s being done. 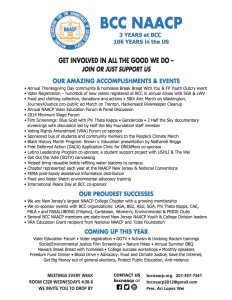 This year’s accomplishments flyer lists some of the BCC NAACP’s successes in our first 3 years in action. These are some activities planned for this year:

Donate to the chapter or join it and help us accomplish even more this school year!

The BCC NAACP meets every week. Join us and become a positive change maker. 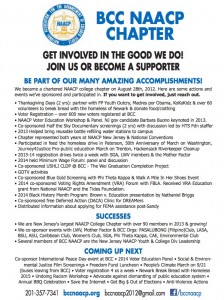 This is what the BCC NAACP has accomplished in our first two years!


Bergen Community College’s NAACP Chapter president is also President of the New Jersey State NAACP Youth & College Division of the NAACP … and he Chairs the Youth & College Division of NAACP Region 2 (Northeast United States from Delaware to Maine). Ivan Gomez Wei’s multi-cultural background caught the attention of WCBS News Radio Reporter Levon Putney, who interviewed him last week. The segment aired throughout the day on 880 AM this past Sunday, Feb 23 2014. Like it? 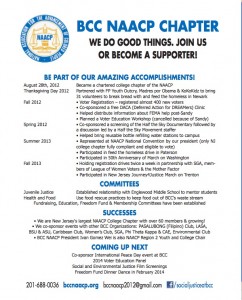 The BCC NAACP chapter has only been established for one year since August of 2012, but in that year we have accomplished so much! We’ve become the largest college chapter in New Jersey with over 70 members. Our president and founder, Ivan Wei, travelled to the national convention in Florida last June to represent us and while he was there, Ivan was elected NAACP Region II Youth and College Chair – Congratulations Prez!

Our chapter partnered with a bunch of different clubs to create the first ever BCC NAACP Voter Education Forum, which drew a crowd of about 250 students, faculty and administrators to hear keynote Barbara Buono, and engage with our excellent panel. We hope to make this an annual event. And, we have registered over 500 voters this past year.

We brought a Half the Sky documentary screening to Bergen, along with a speaker from Half the Sky Foundation who spearheaded a discussion about the important global women’s rights issues raised in the film. The Women’s Club donated food and beverages, and co-hosted this event along with several other clubs.

Last week, we once again rounded up a group of NAACPers, Kokokidz and Madres por Obama, and headed to FP Youth Outcry‘s annual Break Bread With You Thanksgiving celebration, where we donated food, clothing; served food to and shared meals with, Newark’s homeless for the second year.

Thanks go out to Dr. Milon (our chapter advisor), BCC faculty and staff, our partner clubs, members, event participants, NAACP state officials and Bergen County (Adult) Chapter members who have trained and mentored us and our generous donors, for enthusiastically supporting us in our first three semesters. We look forward to many more years of Social Justice at BCC and hope that you continue to support our chapter and aid our initiatives!

How to vote in NJ before Election Day (via The Wei)

We can vote early in NJ even though we don’t have what is technically called “early voting,” because we can vote by paper ballot. There are three ways to vote early the week before Election Day: Mail in the Application to Vote by Mail. Application…

END_OF_DOCUMENT_TOKEN_TO_BE_REPLACED

I have developed some tools to help motivate people to vote in this important election. The complete toolkit and instructions will be posted by tomorrow morning on my blog at The Wei. Meanwhile, here are Vote Pledge Cards you can download – they are a major component of the toolkit. And this is the GOTV plan in a nutshell (as of 10 days before the election):

These are short biographies of the panelists and guest speaker who joined us for today’s BCC NAACP 2013 Voter Education Forum. Thanks to all who shared their support with the Bergen Community College NAACP chapter to make this event happen, and to those who by listening in, showed their interest in being an informed New Jersey voter.

All New Jersey state level political offices are up for election this year, and will be decided by voters on November 5. Gov. Christie, the Republican candidate for governor, declined our invitation to join us today. But, we are fortunate that New Jersey State Senator Barbara Buono accepted. Sen. Buono is also running for governor as New Jersey’s Democratic candidate, and I am very excited that she took time out of her busy campaign schedule to share wisdom and thoughts with us about life, career choices and why it’s important for students to be engaged civically and politically.

JEFF GARDNER, Panelist
Jeff Gardner is an outspoken community advocate. He grew up in New Jersey, attended Rutgers College and Law School and for the past 15 years he has been a successful labor attorney with a private practice in Hawthorne. Jeff is a Co-Founder and Past President of the Hawthorne Historical Society, a Trustee of Passaic County Community College and Chair of the Garden State Equality Educational Fund. Jeff prides himself on being a fighter who is not afraid to take on tough career and community advocacy challenges. He is currently a candidate for Hawthorne Borough Council.

BETH MARMOLEJOS, Panelist
Beth Marmolejos is past President of the Medco Diversity Network and an expert at supporting community-based organizations. She believes in a proactive approach toward effecting change and has been active in the social and political life in both Bergen and Passaic Counties, with stints as Ward President an as a community advocate of individuals with disabilities. Beth served in 1998 as President of the Dominican Empowerment Political Association Committee (DEPAC). She is currently a Democratic candidate running for Wayne Council.

THOMAS REYNOLDS, Panelist
Thomas Reynolds is currently serving his second term as President of the Montclair Branch NAACP. Tom and his executive committee have doubled chapter membership; successfully applied for two economic development grants and one health grant; increased young voter engagement; rallied the community to bring back the community policing program; protected programs that directly affect minority students and more. Tom’s branch has been recognized by the State NAACP as the Most Outstanding Chapter and is working with six other branches throughout the country to raise engagement of young adults in the NAACP.

Tom’s Essay, Why I Vote, will give you insights about why you, too, should vote.

ALEXIS BRAVO, Panelist
Alex is a Communication Arts Major, a Bergen Community College sophomore and speaks fluent Spanish and some French. Although she is a New Jersey native, Alex’ mother is Puerto Rican and father, Ecuadorian. She is active in campus groups including the Business Club, Model UN, Student Activities Board, the Torch newspaper, and she serves as this year’s Student Government Association President. Alex interns for the NJ Republican State Committee, working on the campaigns of Chris Christie and the District 36 Republican candidate.

IVAN GOMEZ WEI, Moderator and BCC NAACP President
Ivan Gomez Wei is an aspiring Urban Farmer and social activist who organizes community around food, sustainability, equal rights and student issues. He holds an AS in Business Administration from Bergen Community College, and is obtaining a horticulture degree. He leads the BCC NAACP Chapter and is chair of the NAACP’s Youth and College Division in the northeast. Ivan is a Chinese-Hispanic Jew; attended Chinese school for many years and is active in Latino political and cultural activities.

REMEMBER – YOU CAN VOTE YOURSELF A RAISE ON NOVEMBER 5th SO MAKE SURE YOU VOTE!

Bergen Community College NAACP President Ivan Wei says: “Please come to the awesome Voter Education Forum we put together for Tuesday October 22 2013 from 12-2. Bring interesting questions and share this event and flier widely! We have an excellent panel scheduled from 12-1pm and gubernatorial candidate NJ State Senator Barbara Buono will be our guest speaker from 1-2pm. 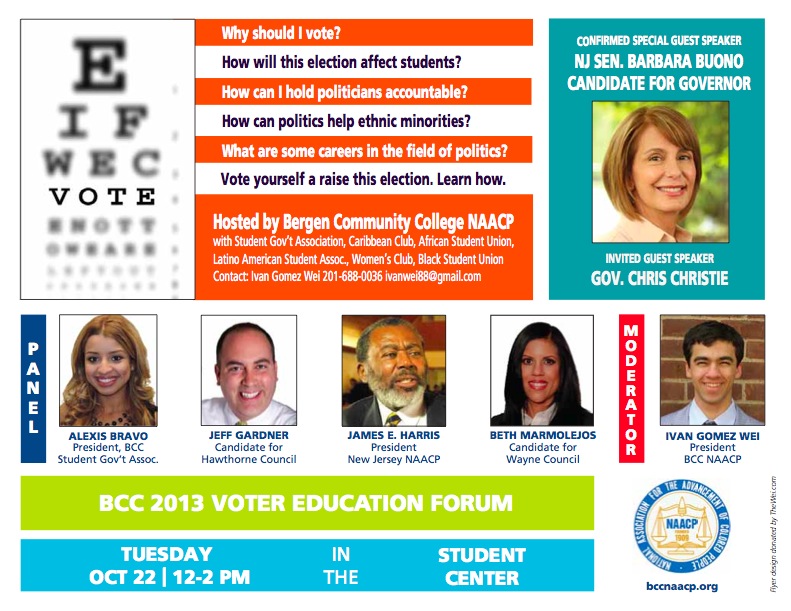 The Voter Education Forum will take place in the BCC Student Center located at the eastern tip of the main building (Pitkin). The general public is welcome to attend, and we hope to see MANY students there learning how to make a positive difference through political and civic engagement and supporting this historic student-run education initiative.

For more information about the event or to volunteer, contact Ivan Gomez Wei at 201.688.0036 or tweet him. We need community or student volunteers to help out during the forum. Your help will be greatly appreciated!

What are some of the important issues concerning New Jersey college students and voters today?